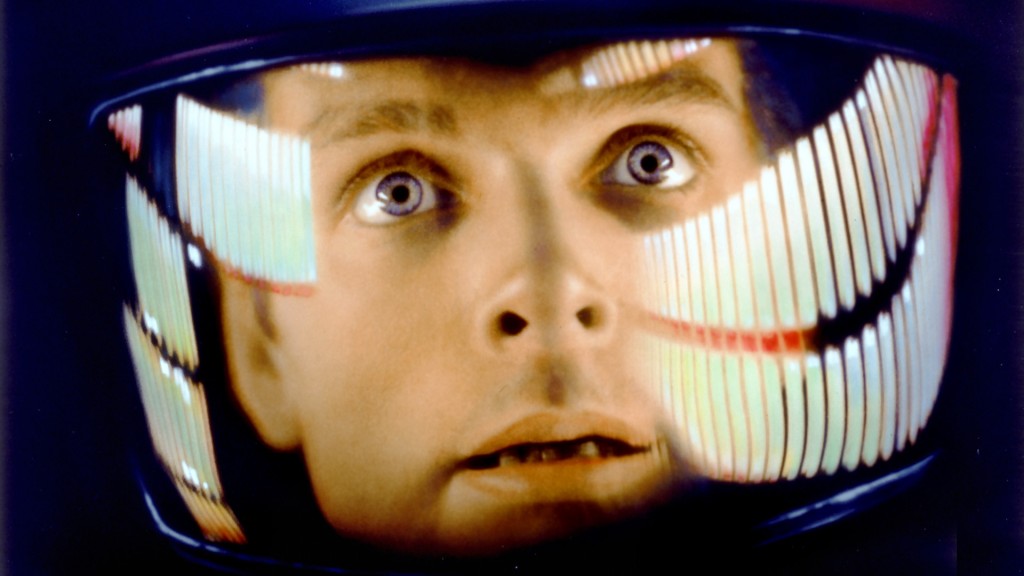 Having seen 2001: A Space Odyssey at the big screen last night I am reminded how beautiful and awe-inspiring it is.  There is no equivalent.  I thought Gravity and Interstellar were similar but they’re not.  They’re just not. They look clumsy and overdone and too loud and too talky and too crass and the music is horrible and everyone says “Come on people!” too much…

It really does make every science fiction offering from the last decade look like Dora The Explorer.  But it doesn’t do several things that films are “supposed” to do; rules I’ve spent the last two years learning.

So here’s how it doesn’t give a shit:

This one isn’t.  The most rounded character in 2001 is HAL.  And he goes from being creepy computer to creepy mad computer in about twenty five minutes, and that’s the extent of his character.  The famous Dave is dead-eyed and glassy, his dead glassy eyes barely creasing as his forgettable colleague gets flung into space.  Then there’s Floyd and some Russians and some ape men.  They’re all as insubstantial as the vaccuum of space.  We know very little about them, we’re not sure what they care about.  But OMG look at that spaceship!  Pretty!

2. You have to be able to sum up the film in a logline.

Good luck with that.  It’s generally believed a film has to have a plot. The story has to be about something.  As you’ll know if you have studied modern film formats in your “log line” you need to cram in the protagonist and the key issue that’s ruining their day into 16 words, 25 if you’re lucky.

In 2001 it’s about.  Um.  Well some weird monolithic things that appear with no warning.  Some apes and some astronauts are interested in them.   A computer goes a bit nuts because he has to lie about it.  We never really know what the big deal was about telling people.

3. You can convey character through dialogue.

Not here you don’t.  There is so little dialogue that it is easy to think that the film is a beautiful classical music video.  The dialogue where it exists is so transactional it is forgettable.  It’s of the “chicken or fish sir?”  “Thanks for coming gentlemen”  “Can you pass me that space clipboard”  variety. The dialogue performs almost no function (other than getting Dave the right space in-flight meal).   Even what HAL says isn’t the creepy thing.  it’s the WAY he says it.  The tone of his voice turns him into a scary bastard when actually the words he’s saying are extremely measured.  This film has nothing to do with characters.  I have no idea what it is to do with actually.  It really doesn’t matter.

OK this rule is broken quite a bit with action movies, but normally by the director cramming in another chase, another battle, or  I expect sometimes it’s ended up being that long because of the indulgent exposition and shit dialogue.  Seriously, following this reminder, from now on all my screenplay scripts are going to have a third of the amount of dialogue.  A fifth.  None in fact.  I’m so over dialogue right now.

The length  of 2001: A Space Odyssey is hugely unexpected in a film with such a thin strand of a plot and with characters who are as glassy as the visors on their shiny helmets.  You’d expect it to end up being a massive drag.  The length manifests in long drawn out sequences where a spaceship docks, or someone walks along a rotating corridor.  In silence.  Or with a well known classical soundtrack.  It will go on for quite a long time but you won’t mind because you will be drooling from your open mouth as you are mesmerised by the cinematography.

5. Old films using models as opposed to CGI are going to look dated.

No No and just NO.  Look, even the ape men at the beginning of this movie are passable by modern standards.  Alright, maybe they’re a bit naff but ape men are fiendishly difficult to get right. The interior spacecraft sequences where people walk in all directions, jog climb through three orientations whilst the set blinks beautifully and smoothly around them… well it’s astonishing that it was done with engineering and camerawork.  They look as good as Gravity on the big screen.

6. A character must “grow” as the film progresses.

Ha!  Well Dave certainly does in some respects in the finale, but he ends up as a foetus.  So bang goes that theory.  And any semblance of logic.  The film isn’t about logic.

Like those optical illusions where you think you see a triangle but it’s the shapes around the edge creating that image; the monoliths gain their looming power from the feeling created by the stunning images and narrative soundtrack.   It’s the weirdest thing.  Or rather they are.  It is.  I absolutely love it.

Nicky lives in Smethwick and works for a broadcast consultancy. She writes for radio, and also writes prose and screenplay for fun, and occasional profit. Mostly fun. She is happiest having a selection box of writing projects to pick at; these frequently involve exploding corpses, plasma balls, ripped reality, concentrated obsessions, and moral failure. She’s not particularly subtle. Occasional fell-botherer. View all posts by Nicky