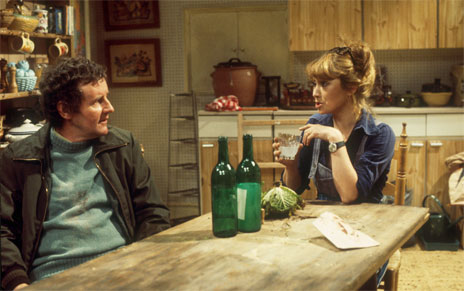 This was all prompted by watching Grayson Perry’s brilliant Who Are You? on catch-up 4oD yesterday (stupidly when the new episode was actually on the TV at the time).  Who are you?  How do you define yourself?  How much is inherited and how much do you invent or assume anew?

I subsequently found my dreams were laced with the theme tune for The Good Life, the TV series from the 1970s.  I’m very fond of this old show and it’s not the first time it has haunted me.

I wouldn’t have watched The Good Life on TV when it was on because, well I was about one and although I remember a black and white TV with a circular dial of some sort there was bugger all on TV for children (or adults come to that).  I must have become aware of it much later.

It was a sitcom from the 1970s which followed the progress of Tom Good, and his wife Barbara as they gave up their middle-class lifestyle for one of self-sufficiency.  The garden was filled with chickens and a goat and although their successes were small, each one was triumphant, not least as snobbish next door neighbours Gerry and Margot Leadbetter sort of wanted them to fail.

My own mother was very involved in the Whole Living movement of the late 70s and early 80s.  She was part of a local group who took it in turns to go to the Whole Food shop in Ware to get the orders for everyone; fat packets of lentils and chickpeas, tofu (of course), tahini, slippery elm and seaweed.  There was a particularly pungent organic shampoo with the consistency of tar; thinking about it the smell was probably coal tar but it was sufficiently repellent that in the end we only used it for cleaning shit off the arse of our long-haired guinea pig.  The (male) guinea pig was called Jessica but that’s neither here nor there.

I can remember the smell of the houses from that time.  You would not have found air freshener or scented cleaning products inside, but it wasn’t an unclean smell.  It was earthy and foodish, redolent of yeast and baking bread.  Kitchens smelled of pastry, slightly greasy maybe with a sweetness of an overripe fruit bowl; but then always fresh air and muddy wellies in the hall with slightly tacky plastic aprons on a doorknob, for the children.  They felt like safe places.

A few years back I downloaded The Good Life episodes onto my laptop and began to watch them over and over again.  My babies were very small and neither slept well.  It was an odd unsettling period of my life.  The OCD-ish rewatching of those episodes (and it was OCD-ish) I think was comforting because it evoked the sights and imagined smells of a time and place where I felt safe.  Those experiences affected me deeply; creating a sense of security and happiness which clearly I have carried with me. Watching The Good Life is like looking in a window to see it all again.

It’s an inheritance of sorts which is very much part of my identity; but it’s not something I feel compelled to replicate for my children.  This is their time, not mine I think and their identities are distinct to mine.  Or maybe I’m just lazy.  I’m a terrible housewife, and a disinterested gardener.  I nurture my children as best I can with truths and books, music and conversation, but not so much with pastry or muddy wellies.  My kitchen smells of Febreeze and Flash not baking bread; although I think I’ve probably got some tacky plastic aprons somewhere.  Maybe I’ll get them out and hang them on a doorknob.

Nicky lives in Smethwick and works for a broadcast consultancy. She writes for radio, and also writes prose and screenplay for fun, and occasional profit. Mostly fun. She is happiest having a selection box of writing projects to pick at; these frequently involve exploding corpses, plasma balls, ripped reality, concentrated obsessions, and moral failure. She’s not particularly subtle. Occasional fell-botherer. View all posts by Nicky